Urologists from Brisbane Urology Clinic offer robotic surgery for the management of cancerous and benign conditions of the kidney, bladder and prostate. Some of the robotic procedures we commonly perform include radical prostatectomy, partial nephrectomy, and pyeloplasty.

WHAT IS ROBOTIC SURGERY? 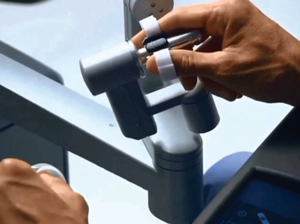 When performing surgery with the da Vinci robotic surgical system, we use miniaturised surgical instruments that are placed in the abdomen through a series of one to two centimetre incisions. The miniaturised instruments are mounted on three separate robotic arms. Each instrument has seven degrees of freedom, giving the surgeon a wide range of motion and unparalleled precision.

A magnified high-definition 3-D camera, is mounted on a fourth arm, also under the surgeon’s control.

The surgeon controls the surgical instruments and the camera from a control centre, known as a console, which is located in the operating room. From the console, the surgeon can control all four arms of the da Vinci simultaneously. 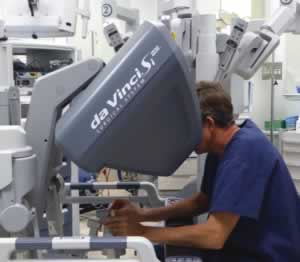 Every movement the surgeon makes with the master controls is replicated precisely by the robot. In this way, the robotic instruments function as a miniaturised extension of the surgeon’s hands.

The surgeon looks through a stereoscopic high-definition monitor that gives a magnified three dimensional view of the operating site.

Because of the console’s design, the surgeon’s eyes and hands are ergonomically aligned with the surgical site, minimising surgeon fatigue.

WHAT ARE THE BENEFITS OF ROBOTIC SURGERY?

Some of the benefits of robotic surgery over traditional laparoscopic (keyhole) or open surgery include: